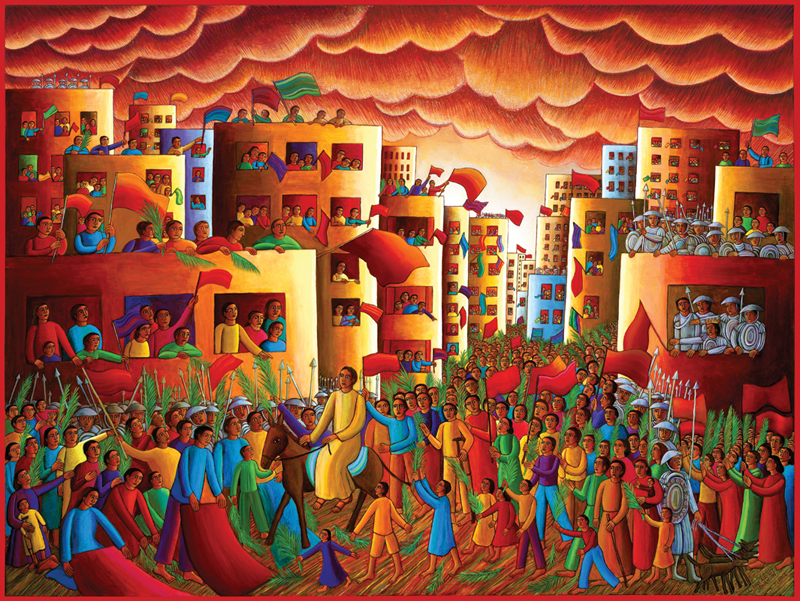 Note: This sermon was preached at First Presbyterian Church as part of our joint worship service.

The reading for today from Zechariah 9 invites us to reflect on a different kind of parade from the ones we normally experience on the 4th of July. Jesus embodied this vision in his “Triumphal Entry” on Palm Sunday when he rode into Jerusalem on a donkey to shouts of joy. While we can’t avoid the connection to Palm Sunday, perhaps we can take a broader look at Zechariah’s message. With Zechariah, perhaps we can ponder what the restoration of peace might look like as God’s dominion extends from sea to sea, and from the River to the ends of the earth.

We rarely turn to Zechariah, which is the second to last book in our Old Testament. While the first eight chapters encourage the returning exiles to rebuild their Temple in Jerusalem, the rest of the book has a different tone and message. That means it probably has a different author and time period from the earlier chapters. In this reading, we hear a call to embrace God’s reign on earth. As Christians, we see this realm revealed in the person and teachings of Jesus, who rode into Jerusalem riding on a donkey a few days before going to the cross.

In this portion of Zechariah, the people of Jerusalem are invited to rejoice greatly and shout aloud because their king is coming, triumphant and victorious. Zechariah invites us to use our imaginations to visualize a different kind of world from the one we inhabit. Instead of chariots, war horses, and battle bows, the prophet speaks of a dominion of peace that will extend to the nations. Putting that in our terms, Zechariah envisions a world without tanks and aircraft carriers.

This king is focused on peace, not conquest. The reference to the River would remind the original hearers of this word of the furthest extent of Solomon’s kingdom as it’s recorded in Scripture. In this vision, however, the realm of peace is larger than even Solomon’s, because it extends to the ends of the earth.

This word from Zechariah 9 reminds us that we are citizens of a realm much larger than a nation. While patriotism has its place, we need to keep it in perspective. Consider that when we pray the prayer Jesus taught, we pledge allegiance to God’s realm on earth as it is in heaven.

When we read this passage in light of Jesus’ ministry, it helps us re-envision his calling and ours. We proclaim him the prince of peace, but do we believe in peace? If we do believe in peace, what does it look like?

I recently participated in one of the marches that call for the end of police brutality and the recognition that “Black Lives Matter.” We as a nation are being reminded that there is an underside to our history that many of us would rather not deal with. But, until we address these realities, including the original sin of slavery and its legacy, as well as the displacement of Native Americans and the internment of Japanese Americans, and the modern prison system, then peace will remain beyond our grasp.

I mention the prison system because Zechariah tells us that this king who is coming will set the prisoners free from the waterless pit. When we hear this word, we need to remember that the United States has the largest prison population in the world. A majority of those incarcerated are there because of the “war on drugs.” This war has had an especially damaging impact on communities of color. So, how might we heed Zechariah’s word about the liberation of the prisoners of hope?

When Jesus announced his mission when he took the pulpit in Nazareth, he drew upon a word from Isaiah 61. He declared to the congregation that the Spirit was upon him, and that he had been anointed to “proclaim release to the captives” (Lk 4:18).

If this was Jesus’ calling, then what is our calling as we gather for worship on this Independence Day weekend? Consider this word from Ben Ollenburger, who points out that “restoration remains unfinished if it does not include the release of prisoners far away from the land. Zion’s peace is provisional until the prisoners are free” [NIB, 7:807].

As we ponder Zechariah’s message this morning, I invite you to reflect on this word from one of our national songs. Katherine Bates wrote and we sing: “God shed his grace on thee, and crown thy good with brotherhood from sea to shining sea.” When Katherine Bates wrote these words, she had in mind the beauty of this nation as it extends from the Atlantic to the Pacific. This morning Zechariah invites us to extend that vision even wider to include all of creation, for that is the realm of God, “on earth as it is in heaven.”