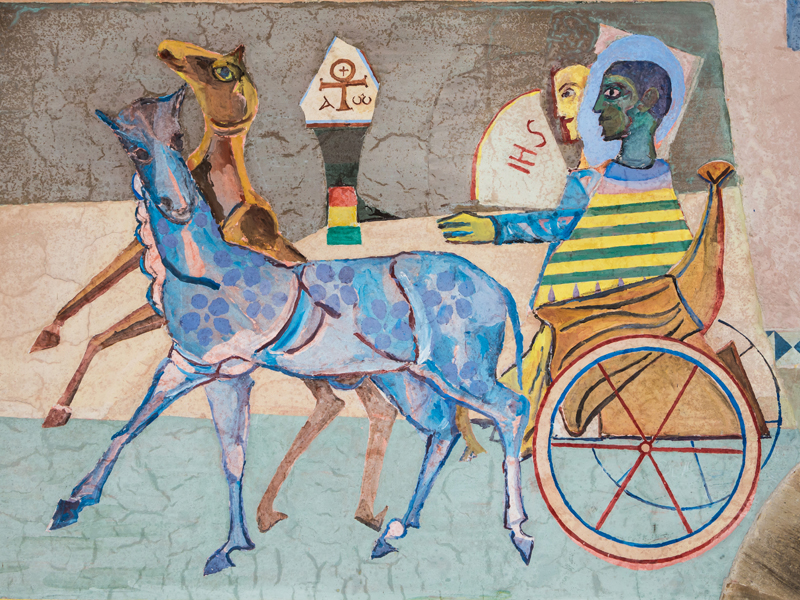 What’s your baptism story? I’ll confess that mine is a bit complicated. It starts at the Catholic hospital where I was born. Apparently, the nurses baptized me just in case I didn’t survive. That baptism was followed by one at my parent’s Episcopal Church. I don’t remember either of them, but I do remember being immersed in a creek when I was seventeen. Then there’s the baptism in the Spirit that I experienced a bit later. So, I believe I’ve covered all the bases. Your story might be similar or it might be different, but whatever it is, this morning we have the opportunity to remember and reaffirm our baptisms as we witness Richard’s baptism.

We’ve already heard a baptism story from the Book of Acts that’s rooted in the commission Jesus gave to his followers at his ascension. Jesus told them that before long the Holy Spirit would empower them so they could proclaim the Gospel of Jesus to the entire world, starting in Jerusalem (Acts 1:8).

One of the members of the church, whom I’ll call Deacon Philip, had already gone to Samaria to preach (Acts 8:4-25). After that boundary-crossing effort proved successful, an angel gave him another boundary-crossing assignment that would help extend the work to the ends of the earth.

While he was still working in Samaria, the angel told him to go down to the road that connected Jerusalem with Gaza. That’s where he ran into the Ethiopian eunuch who was heading home from a visit to Jerusalem. When Philip caught up with him, the Ethiopian was reading Isaiah 53, which describes the death of the suffering servant.

In my imagination, I can see Philip running alongside the chariot trying to listen to what was being read. When he’d heard enough, he asked the man if he understood what he was reading. The Ethiopian eunuch answered him with a question of his own: “How can I, unless someone guides me?” Philip took this as an invitation and jumped into the chariot. As they rode along, Philip shared the story of Jesus from Isaiah.

One of the primary themes of the Book of Acts involves the way in which the Holy Spirit pushes and pulls the church outward toward the ends of the earth so that the Good News of Jesus could be proclaimed. Often that means being pushed into places we don’t see ourselves going. After all, I didn’t imagine I’d end up in Michigan! So, as Willie Jennings points out, one of the messages we hear in this story concerns the way “the Spirit is driving a disciple where the disciple would not ordinarily have gone and creating a meeting that without divine desire would not have happened. This holy intentionality sets the stage for a new possibility of interaction and relationship.” [Acts, p. 87].

That’s what happened here. Both Philip and the Ethiopian official opened themselves up to the Holy Spirit who broke through previously accepted boundaries to include another person, group, and community in the family of God.

Now, we don’t know much about this man. He probably wasn’t Jewish and beyond that, he was a eunuch. Nevertheless, although he had political power and wealth, he would have encountered significant barriers to full participation in the life of the community he identified with. That’s where the Holy Spirit came in and transcended previously imposed limits. That happens, according to Barbara Brown Taylor, when “right relationship with God and neighbor are at stake.”     [Daily Feast, WJK, 2011].

This morning’s reading is rich with powerful implications concerning the work of God in the world. It challenges the way we think about God, ourselves, and our neighbors. It also opens up new possibilities for living in the realm of God. It also offers an important word about baptism.

When Philip finished sharing how the story of Jesus fit into this reading from Isaiah, the Ethiopian official took the initiative and ordered the chariot to stop. He did this because he’d spotted some water. So, he said to Philip: “Look, here is water! What is to prevent me from being baptized?” When Philip couldn’t come up with any barriers, they got out of the chariot and went down to the water. There in that pool of water that sat alongside the wilderness road, Philip baptized him into Jesus. As soon as they emerged from the water, the Spirit snatched Philip away and sent him on another assignment.

As for the Ethiopian eunuch, he went on his way rejoicing in the Lord, because, as Willie Jennings writes:

His future is open-ended now, and God has broken the connection between identity and destiny, between definition and determination, and inserted a new trajectory for his life. He is moving forward to God through the Son and in the Spirit [Acts, p. 86].

Although he had experienced life on the margins, now he was free in Christ, at least spiritually.

Paul said something similar about the radical implications of baptism in Galatians. According to Paul if you are baptized into Christ you have been clothed with Christ. Therefore, “there is no longer Jew or Greek, there is no longer slave or free, there is no longer male and female; for all of you are one in Christ Jesus. And if you belong to Christ, then you are Abraham’s offspring, heirs according to the promise” (Gal. 3:27-29). That promise is one of blessing!

So, “Look, here is water! What is to prevent me from being baptized?”  This morning Richard is answering the question by taking the next step in his journey as a follower of Jesus by being baptized. My prayer for him is that he will experience the same joy as the Ethiopian official experienced at his baptism. May that be true for all of us!

Image attribution: Boeckl, Herbert, 1894-1966. Philip and the Ethiopian Eunuch, from Art in the Christian Tradition, a project of the Vanderbilt Divinity Library, Nashville, TN. https://diglib.library.vanderbilt.edu/act-imagelink.pl?RC=58594 [retrieved May 1, 2021]. Original source: https://commons.wikimedia.org/wiki/File:Abtei_Seckau_Engelskapelle_Bekehrung_des_%C3%84thiopiers.jpg.