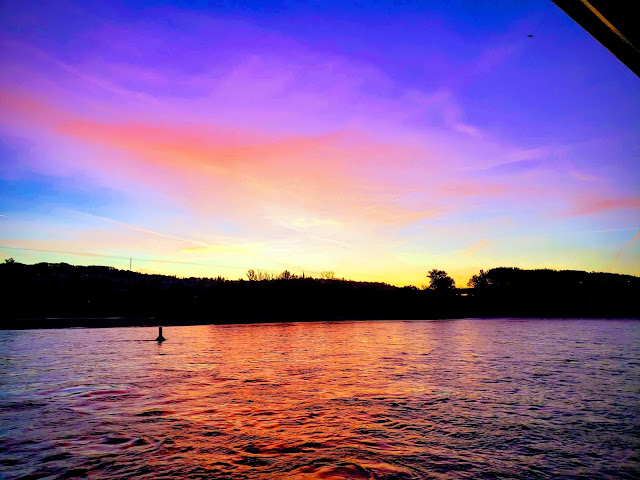 I have a word of advice to offer anyone staying in a home not your own.  If you’re walking through the house at night, be sure to turn on the lights. I learned this lesson the hard way during my trip to Oregon in October. I was staying with friends in Portland, and it was the first night of a week-long trip.  Since I needed to take a pill before going to bed, I followed Mark to the kitchen, in the dark. Unfortunately, I forgot that there are stairs that go down into the kitchen. So, when I stepped down into the kitchen, my right foot missed that first stair, and I went flying into the kitchen. When all was said and done, I found myself lying on my back with a very sore ankle. Yes, I twisted my ankle so badly that it swelled up and turned black and blue. But, that didn’t stop me from pushing on with the trip, sore ankle and all! I had people to see, and places to be. Nevertheless,  if we had turned on the light, none of this would have happened.

When it comes to walking in darkness, make sure you turn on the light. It might save you from stumbling and falling and twisting your ankle!

You might say that during the Season of Epiphany, God turns on the lights so we can see in the darkness.  We’ve already heard Second Isaiah speak on two occasions about Israel being a light to the nations. In Isaiah 42, God says through the prophet:

I am the Lord, I have called you in righteousness, I have taken you by the hand and kept you; I have given you as a covenant to the people, a light to the nations,  to open the eyes that are blind, to bring out the prisoners from the dungeon,  from the prison those who sit in darkness. (Is. 42:6-7).
Then in  Isaiah 49, God says to Israel, “I will make you a light to the nations, that my salvation may reach the ends of the earth!” (Is. 49:6 Tanakh).

This word may have been given first to Israel, but as followers of Jesus, who have been grafted by God’s grace into the vine that is Israel, this same commission to be a light to the nations, has been given to us.  We too are called to be agents of God’s salvation in the world.  Our Disciples’ identity statement makes that clear.  We are called to be a “movement of wholeness in a fragmented world.”

This morning we’ve heard a word from the prophet Isaiah, who lived in the eighth century B.C.E.  This word follows two words given through a sixth-century prophet to exiles living in Babylon. In this morning’s reading, we move back nearly two centuries before the exile. While the people of Judah who lived in the eighth century didn’t experience exile, they did experience moments of darkness. You see, Judah was being threatened by its more powerful neighbors, including the kingdom of Israel to the north. Before too long Israel would fall to the Assyrians, removing one threat, but creating other threats to their survival. But the prophet told this people who “walked in darkness” that they would see “a great light.” Yes, the prophet offers them the promise of liberation from their enemies. They will experience joy because of the “yoke of their burden, and the bar across their shoulders, the rod of their oppressor, you have broken as on the day of Midian.”

This morning we return to a portion of Scripture that we last visited on Christmas Eve. On Christmas Eve we heard the prophet declare:

For a child has been born for us, a son given to us;
authority rests upon his shoulders; and he is named
Wonderful Counselor, Mighty God,
Everlasting Father, Prince of Peace.  (Is. 9:6)

You may also know a version of these words that make up one of the choruses to  Handel’s Messiah.  While we don’t know exactly who this promised child might have been, whatever the identity of the child, the birth of this child would serve as a sign of God’s presence with the people.

The Gospel writers don’t draw directly from this particular declaration about the child who is “Wonderful Counselor, Mighty God, Everlasting Father, Prince of Peace,” but Christians have been looking at Jesus in light of this passage for centuries. After all, the Gospel of Matthew follows Isaiah in declaring this promised child to be Immanuel, “God with us” (Is. 7:14; Mt. 1:22-23).

As we progress through the season of Epiphany, this season of light, we’re reminded that in Jesus the liberating power of God is on display. We hear the word that Jesus is the light that shines in the darkness.

We visit Isaiah 9 this morning in the company of Matthew, who draws on the opening lines of Isaiah 9 to describe the beginning of Jesus’ ministry. Matthew tells us that after John the Baptist was arrested Jesus left Nazareth for Capernaum, in the land of Zebulun and Naphtali, in fulfillment of Isaiah’s promise that people living in darkness would see a great light.  When Jesus moved to the land of Zebulun and Naphtali, he “began to proclaim, ‘Repent, for the kingdom of heaven has come near’” (Mt. 4:12-17).

According to Matthew, Jesus picked up Isaiah’s message of liberation and began to reveal the nature of God’s realm. In proclaiming the message of God’s realm, Jesus invites us to enter in and experience the light that God shines into the darkness, bringing freedom to our lives. Martin Luther King, Jr., another prophet, declared in 1963 that “Darkness cannot drive out darkness, only light can do that. Hate cannot drive out hate, only love can do that.” When the light drives out the darkness, freeing us from our bondage to the darkness, we can rejoice and be glad and celebrate the good news.

We know the truth that freedom leads to celebration. Every Fourth of July we celebrate Independence Day with parades, picnics, and fireworks. The Jews celebrate Passover in remembrance of their liberation from slavery in Egypt. So, whenever liberation occurs, there is cause for celebration.

The Psalm for today comes from Psalm 27, which opens with the words “The Lord is my light and my salvation; whom shall I fear” (Ps. 27:1). Even when it seems as if darkness is closing in on us, creating confusion and disorder, we can take hold of the light that sets us free from fear. Unfortunately, we live at a time when there seems to be an epidemic of what Charlie Brown’s counselor, Lucy Van Pelt, called pantophobia, the fear of everything. Apparently, the light of the Lord is the best vaccine against this threat.

Last Monday evening I attended the Martin Luther King event at the Troy Police Department. It was sponsored by the Troy-area Interfaith Group, the Troy-area Alliance Against Hate Crimes, the Troy Library, and the Police Department. This event reminded us that fear can be dangerous. It can lead to violence against people who seem different. We watched a film that explored several hate crime incidents that took place in Northern California some fifteen to twenty years ago. These included arson attacks against three synagogues in Sacramento, the murder of a gay couple who were pillars of their community in Redding, the murder of a transgender teen in Newark, California, and a cross-burning in Anderson, California. The film not only explored these acts of violence that were rooted in fear, but they all took place under the cover of darkness. The good news is that these communities came together and responded to these acts of violence with acts of light.

After the event concluded, I had a conversation with some friends. The question came up as to whether there has to be an act of violence or hate before the community acts. In other words, why are we always reacting to acts of darkness, rather than being proactive? It’s a good question. Do we only rally to the defense of our neighbors after they’ve been attacked? Or can we stand up for what is right beforehand? Can we be harbingers of light before darkness takes hold? If so, how can we do this? Community efforts like TIG and Know Your Neighbor are expressions of light in the city of Troy, but our numbers are few. So, how do we expand the base?

As we consider this question, we’re again reminded by the Psalmist that “The Lord is my light and my help; whom shall I fear?” (Ps. 27:1 Tanakh). If the Lord is our light, as followers of Jesus, how and where can we be agents of this light as we go about our daily lives? How might we live in hope and not fear, so that the world around us can experience the joy that comes through the reign of God, as it is experienced on earth as it is in heaven?

So let the Light of the Lord shine and the celebration of our freedom begin!